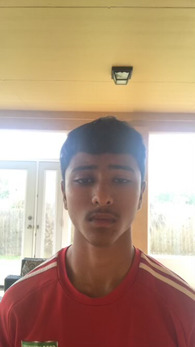 I am a Junior at a parochial private school called Renaissance Academy which I have been a part since kinder garden. The mission of Renaissance Academy is to graduate students with academic excellence, leadership skills and distinguished moral principles. These values have been instilled in my from a very young age. I am an honor roll student with a current GPA of 3.6 and will be graduating in 2022.

I started playing soccer at age 6 with a small club called One World Soccer started by a Spanish coach and have been with Barca Academy Austin since it's inception in 2017 (One World Soccer was acquired by Barca Academy). I have been exposed to Spanish style possession soccer right from the beginning and am considered my team's lead play maker. Here are some of my accomplishments:

1. Was part of u12 one world soccer team that was invited for the Premiere SuperCopa in Dallas in 2015 and made it to semi-finals.

2. Have been part of a team that has won u90c and other tournaments in Dallas, Houston, San Antonio and Austin.

4. Have represented Barca Academy u16 in the Donosti Cup 2019 in San Sebastian, Spain.

5. Was selected to be part of the Barca Academy Residency Program in Casa Grande, Arizona. Declined the offer due to my young age but might still might consider for my senior year.

5. Was selected twice for the STX ODP team that went to Alabama.

6. Have won may futsal tournaments and is currently part of the Futsala u17 academy team in Austin.

7. Got selected to represent US Youth Futsal team to play in Argentina in 2019.

I am aspiring to attend a college that has a reputation in academic excellence as well as soccer achievements. I believe my upbringing will help me excel both in academics as well as on the soccer field. My character, leadership skills and moral principles would be an asset to the team and college I end up in.