College Coach? Click here to view all of Isaac's information. 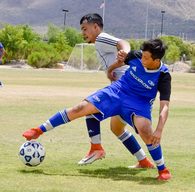 I was invited to the President's Day Tournament in February 2019. This was impactful to me because I was a 15 year old participating in a U19 tournament after being with West Texas RUSH for only a year. It inspired me because it introduced me to the world of college soccer. I met college recruiters and top ranking teams from across the country. I was able to see what opportunities I had available to me and how to make the most of them.

I always preferred to have a ball at my feet rather than at my hands. I have played other team sports, such as baseball and football. I was a pitcher and third baseman. I was a running back and wide receiver. However, these sports didn't catch my heart like soccer. My family has always played soccer, either for fun or for city leagues. So growing up around it shaped my love for the game.

I joined my first official soccer team when I was 12 years old which was an adult men’s league team.  I was recruited to join them while they saw me play with my uncle’s adult league team. I learned the value of teamwork, commitment and, sacrifices watching and playing with the older players.

In order to be skillful at soccer, I had to be disciplined on and off the field. I developed off the field discipline at school and with community service. I was part of the the robotics competition team, the College Readiness Leadership Program (CRLP),competed in the Language Other Than English (LOTE) Olympiad in the category of Turkish Poetry, and placed in the 99 percentile for my grade in the mathematics STARR (State of Texas Assessments of Academic Readiness) exam. I volunteer twice a week at my local church where I am able to develop a serving attitude and place the needs of others first.

Being part of West Texas RUSH has helped me grow as a player and a young man. The TARGET United Cup in May 2019 was one of my highIight moments where I was able to make 3 goals and assist in 3 goals. In July 2019, I participated in the EXACT Sports training camp. It developed my mental focus and strength which is key to success on and off the field. I have been able to grow into various playing positions, from winger to midfielder to forward. Being able to be flexible into various positions allows me to keep my skill set fresh and sharp.

I am looking for a program to develop me academically and athletically. With my success in the robotics club, CRLP, and math STARR exam, I developed a desire to become a computer engineer. I have developed the abilities to compete at a college sports level and meet expectations academically but at the same time still have a willingness to learn and be trainable.