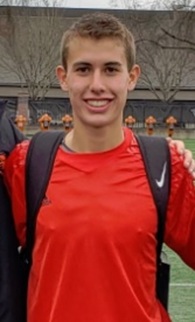 My name is Charlie Thorpe.

I am now a Senior in High School and I will be graduating from American Fork High School, Utah in One Year, in May of 2020.

I have been playing up an age level on the 2001 bracket for the past 5 years.

We are Sparta United FC Premier Blue 01 with Coach: Justus Koilliker according to Gotsoccer.com

I am a 2x State Cup Champion, and

I am a 3x State Cup Finalist.

I have also played for the Olympic Development Program, ODP for the last 4 years.

I also won "Utah Athlete of the Month."

I have trained with Goalkeeper specific training with MLS, Real Salt Lake Goalkeeper Coach Brandon Gilliam for the last 6 years as my personal trainer.

I have also trained with and worked with the RSL Development Academy for the passed two years.

I have also trained with the D1 Men's Head Soccer Coach for Brigham Young University.

I am a highly sought after goalkeeper guest player for several Club Teams in my area and have trained with and guest played for all of them.

References and Coaches that I have trained with: