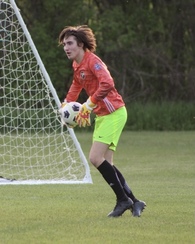 I am an aggressive goalkeeper and have played this position since I was 7 years old. Passion, Courage, Wisdom, Excellence and Honor are values that have been instilled in me by my coaches over 1000s of hours of training and games.  I would  like to play for a college or university that offers a challenging high level soccer program as well as pursue a degree in Health Sciences and your school appears to offer these opportunities. My longer term goal is to play for a professional team and the USMNT.  I received the Presidential Education Award (all A's & B's) as well as the Presidential Fitness Award while at Colchester Middle School.  More than halfway through my junior year at Colchester High School, I have a 3.62 overall GPA.

I am in my 8th season as the starting GK for Synergy Football Club (SFC) and have been the starter for Colchester High School Varsity since I was a sophomore.  I helped my team make it to the quarterfinals last fall of 2020, which is my junior year:

In addition to SFC and Colchester HS, I also have played with many Global Premier Soccer teams, Region I East ODP and Vermont ODP.  I have earned numerous ID selections and played both nationally and internationally across the US, Costa Rica, UK and Sweden. I was named runner up to player of the tournament at the Sheffield Trophy in Sheffield, UK in August of 2019.  I had the opportunity to play against top level development teams such as Celtic, Sheffield United, Leeds United and helped our team make it to the finals:

In July, 2019 at the Gothia Cup in Sweden, I led my team to the final 16 out of 94 teams.  I had a clean sheet vs.a televised match against development academy team IF Elsborg which enabled us to advance out of the group stage:

I am currently on the East Region I ODP team and have made that team 3 out of the past 4 years.  I was also chosen from a series of competitive Global Premier Soccer ID sessions across the US in 2019/20 and made the selection as the only GK  that was to travel to Bayern Munich for the German Youth Cup in May of 2020.  Thomas Dollner, the Bayern youth soccer coach, personally chose me out of the hundreds of Global Premier Soccer goalkeepers across the US, Canada and Puerto Rico.  I was also chosen to attend the Surf Cup in San Diego in August of 2020. Unfortunately, COVID forced these events to be cancelled and Global Premier Soccer out of business.

One thing that makes me different from other goalkeepers is my experience playing on multiple teams across multiple age groups at the same time.  I have had to learn to adapt to constantly playing with different players that are sometimes 3-4 years apart in age, different coaches and different styles instead of always playing with the same people. This started when I was a developmental player (DP) for the Global Premier Soccer (GPS) USSDA U12 team and has continued with the GPS National/Elite teams, East Region I ODP,  Vermont ODP and now Colchester HS division 1 Varsity.  I received honorable mentions for my performance during the fall of 2020 from the Vermont HS coaches association and the Burlington Free Press.

Living in Vermont and playing at an elite club level is difficult since there is a lot of travel involved to play against top level competition.  I have never played a game with Synergy FC that was with players all at the same age group since the number of committed players in VT that are willing to put in the 10+ hrs/wk of training plus all the travel is limited.  As a result, I have always played up or played with younger players in a higher age bracket.  This constantly puts me under pressure as a GK where I routinely see more than 20 shots on goal per game.  When I was younger, I was shorter than many of my opponents so I learned about positioning and technique to stop shots.  This has enabled me to learn at a faster pace and to better understand the game from a broader perspective which has contributed to my success now that I am 6'1".  Being exposed to many different coaches and styles of play has also helped me to develop as a player and to become more competitive.

HERE IS A LINK TO MY CURRENT RESUME (opens best on a laptop/PC):

Thank you for your time,