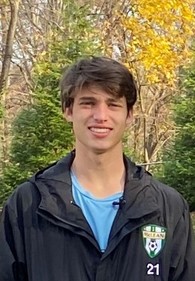 I’m Ethan Gartner, also known as #4 (in Geneva) or now #21 (ECNL Mclean) on the field. I was born in Bangkok, Thailand, in 2003, where my family was posted with the U.S. Government. I have played competitive soccer for the majority of my life. I have lived primarily overseas: specifically in Thailand, Singapore, Japan, and Switzerland. However, I consider home base to be McLean, Virginia, and I am American. I am a junior at Langley High School. I view soccer as a way to relieve my stress and enhance my leadership capabilities. I pride myself on uniting my teammates and boosting their self confidence. Soccer demonstrates the loyalty I have to my team, my relentless spirit, and my determination to always better myself. Soccer completes me and serves as my outlet.

At only four years old, I began my soccer journey as a striker. Unlike others, I am ambidextrous and enjoy switching it up on the field. When I was a Freshman in High School in Geneva Switzerland, I played on Junior Varsity and received The Rising Star Award, signifying my athletic ability regarding both soccer and running. As a sophomore, I played on the Varsity team and as a starting center midfielder. Our team was granted the opportunity to play soccer in Eindhoven, Netherlands and we won first place in the ISAA tournament in 2019. During this tournament, I was awarded MVP of my team. While in Switzerland, I also played for FC Versoix in the Geneva Canton. We were coached in French, so I was able to utilize my limited french speaking skills to understand instruction (and my teammates helped me with translation at times)!

I have attended a variety of ID soccer camps over the last five years, including: McLean ID camps, Frostburg ID camps, and UVA’s ID soccer camp. I loved focusing on improving my soccer skills and establishing new friendships among initial strangers. I grew a lot as a player and succeeded when faced with the challenge of working with brand new teams. I believe teamwork is a fundamental requirement for succeeding in soccer. Without your team, it is impossible to maintain victories.

In the summer of 2020, I moved back to McLean, Virginia, and I am playing for the ECNL Mclean team. Hoping that high school sports resume in the Spring, I plan on playing for the varsity Langley High School team. In past years, I played for Mclean’s CCL team and was coached by Alan Portillo, who I am very lucky to have now as my ECNL Mclean coach; Ken Krieger and Todd West. It is great playing with my old teammates and witnessing how we have all grown as players.

Here’s to many more years on the soccer pitch!