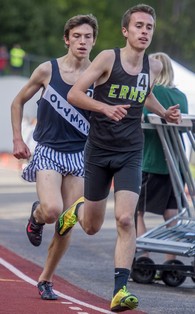 I'm a good candidate for your team because I have a positive, focused and hard-working attitude. I train to win, but the team matters to me and I listen to coaches. I help people on my team and in life who are just starting out or need some help to better themselves.  I've refereed soccer for 6 years, I'm the youth representative and a member of the Pierce County Soccer Referee Board of Directors and I'm good with interacting with children and kids younger than me because I have patience and want to teach them what I've learned.  I've refereed nearly 400 games from U8 - U18 in select and premier soccer as a (US Soccer Grade 7) center ref and assistant ref.  I also work 5 hours a month at my church's food bank helping stock the shelves, and getting items for people who need the assistance to make ends meet. My work ethic is strong in school, in track and cross country training and at work in a job. I had a lot of fun and worked hard in XC and track this school year and I was named South Puget Sound Male Athlete of the Year in XC and also in Track.  I'm a 3 year XC Varsity letterman and a 2 year varsity letterman in track. I love to run.   I want to help the freshman and sophomores in XC and track because I had a senior who really guided me when I was an underclassman.  Lastly, I want to help my coach keep building up our high school XC program and distance runners in track too.  I want to win, compete and keep caring for and helping my teammates and people to help them succeed.

I'd like to get my college education and degree. I'm interested in engineering (preferably civil engineering) or math. I completed my 4th year of the Spanish language and liked it.  My high school and junior high were great schools to go to and all of my teachers have been really good. I like all of my coaches and I've been able to talk to other runners at bigtime running high schools in my state to get additional tips on training and tactics. I like my competitors from the other schools; we talk and text a lot; and I respect them.  They're good guys, but we all try to win when we race against each other.

Overall,  I like to compete, focus and work hard. My teammates in XC and track are my friends and we have a lot of fun running.  I want us to do well as a team in my senior year, and I want it to be a good program for my sister when she's a freshman runner in the fall of 2017.  I want to run at the highest level that I'm capable of doing. I think the same way about my school studies and what I want to do with my life, too.  In school, I want to be the best that I can be academically and broaden my understanding of math and science, grow as a person, and enjoy the time with my friends and family.

Thank you for your interest in me.