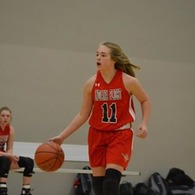 I first began to take interest in basketball in first grade biddy ball.  At the end of our two weeks of biddy ball the head varsity coach at the time would put us into teams. Once we had our teams, we would play a couple Saturdays against the other teams that were formed. Me being so young and it being close to the first times I had ever played, I was just starting to learn the game and wasn't the most skilled. I remember from day one being frustrated with myself that I wasn't doing the best I thought I was capable of.  From then on I was determined to get better and better.  To my luck, my fourth grade year the Paoli Girls Baskteball Program hired a new coach. For the longest time he nagged and nagged my dad to help him out with varsity.  At first, my dad was against coaching at his rival school growing up, but I'm pretty sure mom told him that he needed to start thinking about his three daughters. I, of course, was totally for my dad being my coach for years to come and one night I asked him if he would take the position. Me asking kind of broke the ice for my dad in deciding to take the position.  From then on I've had gym access any time I wanted which has really given me a great advantage. I started to get into travel ball. Once again, my first year of travel ball, I struggled at standing out like I wanted to. That's when I told dad that I wanted to work even harder toward improving my skills.  The whole exerperience with travel ball has been motivating to me to become my absolute best.

I've learned a lot about myself throughout  my basketball career. It really shows how much the sport of basketball can help you find your character. I've learned that I'm a good leader, and being point guard all my life has helped me with that.   Along with that, I'm really competitive.  No matter the circumstances, I have always wanted to come out on top.  And when I don't, it motivates me to get better. Throughout my high school career,  I plan to be in all AP classes and earn straight A's. With this goal, I also expect myself to be in the top ten percent of my graduating class.

Last summer I had a rough experience. It turned out that I had a stress fracture in my right foot. The doctor put me in a boot for six weeks. This was crushing news for me. I missed most of my school softball season and about a month of travel baskeball, but it still didn't stop me from doing form shooting for nearly 45 minutes a couple times a week. It was a hard setback , but I knew that I coudn't let it get in the way of my goals. I had to make a slow transition out of the boot and was limited to a couple minutes per half per basketball game, but I tried to take advantage of every second I got out their on the court. By the end of travel season I was back where I wanted to be as one of the starting five.

I think I would be a good college athlete because of one of my best attributes, leadership. You can count on me to do my job to the best of my ability while helping my other teammates do theirs as well. I am the one who gets my team pumped up before games and I am the one who makes sure everyone, including myself, busts their butts to make sure we can get to the level where we want to be. Being the leader of a team has always been my roll and I can't wait to see what college team I may have the privilege to lead one day.