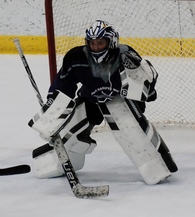 I have always dreamed of playing competitive hockey at a college or university.  I started playing hockey for the Thousand Island Pirates in Upstate New York when I was five years old.  My family and I moved there from Hawaii when my father was transferred to the Chief of Staff position at Fort Drum NY.  I had never seen snow or ice and my parents signed both my brother and I up to learn to skate, which soon transitioned into playing competitive hockey.  Once I became a goalie, my father would drive me to Ontario, Canada twice a month to take private lessons at the Gold in the Net goalie training school. In the Spring, I was always invited to play for an all girls select team, Oswego Lady Lightning, at the Women’s Worlds largest hockey tournament in Brampton, Canada hosted by the Brampton Canadettes Girls Hockey Team. It was huge and there were more girls hockey teams than I have ever seen.  The first year we competed, my team did not advance very far. This experience was humbling and provided me with the exposure to what competitive hockey is really all about and instilled my desire to be the best goalie I could become. I pushed myself hard at every opportunity I had so I could play to the best of my ability against the the Canadian teams and provide my team with every opportunity to win. All of the hard work and determination payed off because we came in first place and I was chosen MVP in the championship game by the Canadian coaches. In the summer, I played for another all girls select team, St.Lawrence Shiver and we played in various tournaments throughout Canada and New York.

My father retired from the US Army and when I was 11 years old we moved to East Lyme, Connecticut where I played for the CT Polar Bears for my U12 and U14 tier 1 seasons.  Both years my team made it to States. While playing for the Polar Bears I had the opportunity to play at Quinnipiac University and to watch their women's ice hockey team. I loved the speed and talent of the college athletes and I knew that I wanted to play collegiate hockey. In my second U14 season I tried out and was selected as the Tier 1 starting goalie for the CT Mid Fairfield Stars.  We had a great season, won the states and regionals and advanced to play in the Nationals in Detroit, Michigan. I was selected to take part in the New England District Festival and was chosen to represent Connecticut for three years(POC Bill Leidt).

Last summer, 2017, my father accepted a job in Brockton, MA. so we moved to South Shore Massachusetts and I played for the Boston Bandits and then for my high school team (BMW-ORR).  I was selected as the starting goalie out of the four on the team. During that season we won the Jim Gormley Cup, the Canal Cup and the Martha’s Vineyard tournament and we also made it to States Division 1 tournament for the first time in the history of the program. During the 2017-2018 season, I was selected as Player of the Week by the Cape Cod Times, Player of the Year by The Standard Times, made the All-Star Player listing in the Boston Globe, and selected as rookie of the year by my coaches. This year I played for the Cape Cod Storm and we made it to Massachusetts state quarter finals. The 2018-19 High School hockey just began and I have been selected as an assistant captain by my coaches. I will work hard with my teammates and lead by example to qualify for States again this year and try to win the state title.

I love hockey and pride myself on giving my team every opportunity to win by stopping the maximum number of shots. My father has always told me if the other team can’t score, we can’t lose. I go in to every game and do my best to get a shut-out for my teammates. I give 100% at every practice and in every game and I never quit tracking or trying, no matter the shot count or score. I want to play hockey at the highest level of competition and be the difference maker to ensure my teams success.  This pasts season I had a 1.61 goals against average with a 95% save average. I intend to beat that this hockey season by earning as many shutouts as possible so my team can go all the way in the girls D1 this year. I will do the same for any team I play for.

As I continue to pursue my academic and athletic goals I am committed to being a strong contributor and leader to my team and coaches. Since freshman year, I have been able to maintain a 4.0 GPA by working very hard in all of my classes and taking challenging AP courses. Being a three sport athlete has taught me how to balance my time efficiently in order to complete all my work and prepare for exams. In addition to hockey, I play varsity softball, have played varsity volleyball and will play field hockey this coming fall.  I hope to attend a great college where I can major in a Pre-Vet program and play competitive college hockey.