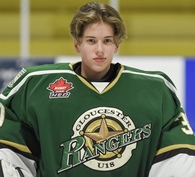 I first stepped on the ice at the age of 4 years old and hockey quickly turned into my biggest passion. I love the feeling of breathing in the cold rink air, the pride after making a solid save, seeing my hard work lead to positive results and the sense of family created within a team.

Since I watched the Canadian Olympic women’s team win gold at the Vancouver Olympics at the age of 5, it has become my ultimate goal to represent my country in the most prestigious competition in the world. Collegiate hockey is the next step in my journey. I aspire to have the opportunity to compete in Division 1 of the NCAA.

Given the potential for there to be no games this season due to Covid, I decided to challenge myself in 2020-2021 and try out for a boys competitive team.  I believed I would best develop this year on a team where I was pushed and challenged in every practice. I began tryouts at the U16 level but was invited to try out at the U18 level after two weeks.  I was selected to the U18 Gloucester Rangers AA boys team and was one of only two underage players (2005). I was also the only female player at this level in the city.

As I was dedicated to maximizing my development during the pandemic break, I also attended the Canadian International Hockey Academy, where I had the opportunity to develop in the boys’ AAA prep program and was one of only two female students accepted into the school. Outside of school, I continued my goalie and biomechanics training.

Over the years, coaches and teachers have praised my work ethic and motivation. I am a quiet person, but I lead by example by giving my maximum effort during every practice, game, and all other endeavours in my life. I am very self-driven, I aim to excel and always look forward to the next opportunity to improve.

I strive to attend a school that will allow me to reach my full potential as a goalie and as a student.  I am hoping to find a coach who believes in me, a team that feels like a family, and an environment that will push me to achieve my best.

Yes. Highly gifted program, must be in the 99th percentile on Otis-Lennon test to be admitted