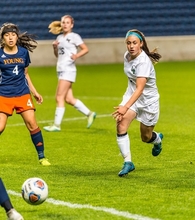 Growing up as a two-sport athlete has defined a lot of who I am today. Beginning at the age of six, I participated in two competitive sports, soccer and gymnastics. By the time I was 8 years old I was competing at the national level in both sports, and at 10 years old I won a national tumbling championship. Success in my sports did not come without sacrifice though. I grew accustomed to late nights of homework and my teammates became my norm as I routinely gave up social events in order to be at practices, games, tournaments and competitions. But, if I could replay my life so far, I would not change a thing. Largely because of my athletic background, I am a disciplined, focused and confident individual. I know what it means to train hard in an individual sport, where you have to constantly become better than your previous self and endure the pressure of performing in front of judges and spectators. And, I also know what it means to be a teammate and work with a group of athletes for a common goal of individual and team success.

A few years ago I gave up gymnastics in order to focus on soccer and school. That proved to be a good decision because now I attend Lane Tech, a selective enrollment college prep high school where I am taking all honors and AP classes and maintaining a very high GPA.  I play soccer for a top-ranked Pre-Academy team as well as played and practiced part-time with the U19 Development Academy team.  Training at the DA level was a great opportunity and made me a better and more confident player.  I was offered a roster spot on DA for the Spring 2020 season, however, I chose to play varsity and wait until Fall 2020 to consider joining DA.   Even though I won't have that opportunity now that the DA program has ended, I will always value that training and experience.  I also played soccer at the varsity level freshman and sophomore year, helping my team win two City Championship titles.  Winning these championships with my teammates was definitely the highlight of my high school soccer career. However, I feel I grew more as an athlete from our loss at the 2019 regional finals, when our team was expected to win. That made me want to work even harder to help lead my team to the 2020 regional title.  But, sadly that won't be a possibility this year as high school soccer seasons have been canceled due to the pandemic and school closures.  It is an unfortunate twist of events, but my team and I can only look forward to working hard to fulfill our goals next year.

An ultimate goal of mine is to play soccer internationally. I have had two opportunities to help fulfill this dream. In 2019, I was part of the IL ODP team that competed in Barcelona, Spain, which was an incredible experience. I was also recently offered a position on a Mexican professional team, Club Leon Feminil, in Guanajuato, Mexico.  The road to this amazing opportunity began when I was 6 years old, playing soccer with a youth Mexican league team, Leon USA, in Chicago.  My family maintained communication with that team and in the summer of 2019 I was invited by a scout to a tryout in Mexico.  I obtained my dual-citizenship and then attended 5 days of tryouts in Mexico this past November.  Club Leon offered me a position on their professional team for this season, but unfortunately the timing with high school made that impossible.

I am open to many college options, but I hope to attend a mid to large-sized university where I will get a good education and be able to make an impact on a strong D1 soccer team. I would like to pursue playing soccer for Club Leon Feminil after college, as well as the Women's Mexican National Team.  I am interested in a number of different academic fields such as biology, zoology, environmental science, Spanish and digital media and arts.  My goals for the remainder of high school are to maintain my high GPA, continue to develop as a soccer player, and to find the university that is the best fit for me both academically and athletically.