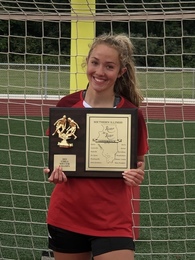 Hi, my name is Bridget Bailey. I am in my senior year at Murphysboro High School. I currently play high school soccer along with high school volleyball.  I have also played on various club teams for both soccer and volleyball.  I started playing soccer at age 4.  I grew up playing a number of different sports but soccer is the sport I am most passionate about and love the most, and hope to continue to play in college.  I love being part of a team!

My senior year soccer games will start in March 2023.  Thus far senior year I have continued to play volleyball as a varsity starter and was awarded the Inaugural "Mike Layne" Team Character Award.

During my Junior year, I received the soccer team’s “Defensive Award” and an “All Conference Award.”   Our team won conference and we made it to the second round of regionals.

During my sophomore year of HS, we were basically a whole new team, due to COVID-19 and not getting to play for a season.  Our goalie and defense was made up of all freshmen plus myself and one senior.  The senior had not played soccer since elementary school, so I stepped up and became the leader for our back line since I was our most experienced defender.  During the season we were unscored upon up until one of our last games against a really talented team.  They got one goal against us and we came right back and scored within the last few minutes of the game. We ended up tying that game (1-1) but we had beaten them the first time we played them so we ended up winning conference. The whole season was a dream, that no one expected.  Our teamwork paid off.  Our team went on to play in sectionals when we got knocked out in the second round and lost our first game of the season.  I was so proud of what we had accomplished.

Not only am I involved athletically but I am also active in school clubs and have a 3.99 GPA on a 4.0 scale.  During my Senior year, I was voted to be a Pride Leader by faculty and staff and received the Top Senior Award in October 2022.    I am involved in Beta Club, Key Club, and National Honors Society.  I have also had multiple part-time jobs such as  Murphysboro Baseball Inc concessions and Scooters Coffee.  I would like to major in nursing.  I’m so excited be experiencing the recruiting process and I can’t wait to see what my future holds. I hope it includes continuing to learn and  grow while playing college soccer while obtaining a degree in nursing.

Below is a link to my youtube channel where you can watch more highlight/game film.

Thanks for reading more about me.  Bridget