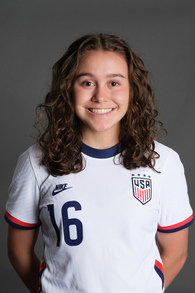 I began playing soccer at the age of three.  Along my journey to where I am today, I've played multiple sports and have always been recognized by my achievements in all of them.  By the age of five, I earned a purple belt in Taekwondo.  Taekwondo had taught me a great deal of self-discipline and determination.  Gymnastics, flag football, t-ball and basketball as well as swimming were all part of my weekly activities.  Having a full schedule of sports on top of schooling has always been a way of life for me.

By the time I was nine years old, my love for soccer was greater than that of all other sports – as I began playing for two different local club soccer teams.  I attended practices daily and then was always wanting more by attending any and all skills sessions offered. My coordination level has always been impressive, that coupled with determination to work hard at these sessions allowed me to glean impressive skills that would put me on the forefront multiple years in a row at the United States Technical Championships taking the ultimate prize of Grand Champion two years in a row.

I currently play club soccer for Solar U15 ECNL team from Dallas, Texas and for the Michigan Jaguars U15 and U17 team within the Girls Academy League. During the summers in Michigan, I play for Liverpool Football Club International Academy Michigan, in the Super Y League.

I want people to see me as more than a soccer player as well.  I am the daughter of Mario and Gretchen Villarreal and Martina’s older sister.  I am four and a half years older than Martina, and also have a very large extended family, which I enjoy spending time with.  I’m named after my paternal Great Grandmother. The name Amalia is the Latinized form of the Germanic Amal meaning “to work, industrious.”

As an active member of  St. Therese Catholic Church in Lansing, in April 2021, I took part in the sacrament of confirmation., and regularly volunteer within the weekly religious education program.

During the 2020-2021 school year,  my freshman year, I held a 4.0 GPA at Lansing Catholic High school. In addition I ran varsity Cross Country and Track and Field along with my two club soccer teams. Over the cross country season our team took 10th in the State Championships, held at Michigan International Speedway. I then became the 9th fastest Freshmen runner all-time at Lansing Catholic High School.