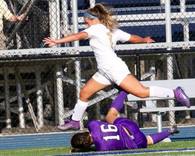 Please allow me to introduce myself more fully. While my formal name is Elizabeth Mustico, most people call me Ellie. I am currently in my Junior year at Notre Dame High School in Elmira, NY.  I am President of my school and Captain of our soccer and basketball teams. I have been a main contributor for Notre Dame’s varsity team since 7th grade, when our team made it to the New York’s State Championship game. We were also successful over those years, winning the NY State Regionals twice, making it to the state finals and losing in overtime in the final four.

I was a member of NY West in the Olympic Development Program in 8th grade.  I led all field players in minutes played in the ODP tourney.  I am often the captain of my travel teams where I try to lead by example. I can play any position on the pitch. In fact, I have had single games in which I have played almost every position.

I am always trying to find my own weaknesses in order to attempt to turn them into strengths.  For example, during my 8th grade season, I found that I was having difficulty getting the ball back to my right foot for a shot against tougher defenders.  Over the off season, I worked weekly to develop my left foot.  Now I feel equally comfortable shooting and passing with my left or right foot.

My best attribute is my competitiveness and I typically play my best games of the year against the best competition. I have an intense hatred of losing, no matter what the sport. In my very first year of travel softball, my team won the ASA B Eastern National Championship where I started at third base and batted fifth. The next year my team won the NY State Championship where I pitched in 5 of the 6 games in the two day tournament, not allowing even a single earned run, and I batted clean-up.

Although soccer is my favorite sport by far, I am also a very competitive basketball player where I was the starting point guard for Notre Dame as early as 8th grade, as well as for my travel team which won a NYS co-Championship. I was named MVP of that tournament.  I continue to play basketball for Notre Dame, where I am the point guard and Captain.  I have found playing basketball makes me a faster, smarter soccer player, and allows me to gain a physical and mental edge.

As a student I consistently rank towards the top of my class with a GPA of around 3.6. This is while taking honors level classes. I am very interested in Science and Math.

I am hoping to find a great fit at a competitive school. If there is anything I can do to help you decide whether I might be a good fit, please don’t hesitate to ask. I am excited about the possibility of competing at the college level.