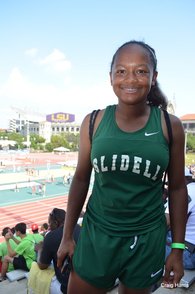 My name is Jessica Harris. This is my third year of running Varsity Track and Field at Slidell High School in the graduating class of 2015. I am 5’ 0” tall and run short distance sprints including the 100m, 200m, 400m dashes and their relays. I love to compete and would like to run at the next level.  Most recently, I received 7-MVP honors in the 2014 LHSAA Track and Field season, including Overall MVP for the District Championship. Additionally, I earned 3rd place in the 60m dash for the 2014 Louisiana High School Athletic Association's Indoor State Championship and 2nd place in 100m dash and 3rd place in 200m dash in the 2013 State Championship.  I was a semi-finalist in the AAU 2012 Junior Olympics in Humble, Texas, finishing in 11th place in the 100m dash.

I am a hard worker both on the track and off.  When I am not training, I am studying. I have kept an exemplary academic record in high school.  I am currently taking a full complement of honors and dual-enrollment classes, with five of them earning advanced placement or college credits which will put me ahead of the game with core courses in my first semester of college.  Regarding academic achievements, my High School Principal recently awarded me with Junior Student of the Month, recognizing my consistently positive academic abilities.  It was the third time that I was presented with this type of award, the other times being my Freshman and Sophomore years.  Also, induction into the Mu Alpha Theta Math Honor Society occurred at the end of my Sophomore year, with the National Honor Society induction occurring at the end of my Junior year.

Extracurricular participation in Interact, a community service organization, volunteering with Toys for Tots, and induction into Beta Club, an academic and community outreach organization have offered me the chance to increase social awareness.  I completed my third year of playing Varsity Girls Soccer at my High School, and my fifth year of playing competitive soccer with the Slidell Cyclones, the 2014 Division Champions and 2013 C2 State Champions, which advanced to the semi-finals in the regional championships in Decatur, Alabama.  Volunteering to assist with the training of 4 year old soccer players at the Slidell Youth Soccer Club allows me show others how to work as a member of a team.

In summary, I would like to go to a college with notable academic and athletic programs, which would allow me to continue improving my skills and abilities in track, but also to progress academically while pursuing a degree in Biology. My ultimate goal is to earn the opportunity to attend medical school.  I feel confident that with continued training, future seasons of Track will see more progress toward my goal of moving on to the next level.