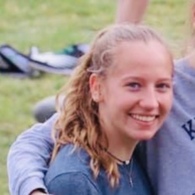 I stand four feet off the ground balancing on a four-inch-wide balance beam preparing to do a back handspring - a skill that I have done multiple times in the past.  However, something is telling me I cannot do the skill this time. I know I am physically capable of doing it, but for some reason, my mind is telling me no. Teammates and coaches encourage me to go for the skill, but after several minutes of standing there with no progress, frustration and fear overwhelm me. I hop off the beam in defeat, taking a huge blow to my self-confidence. I would have never thought that a skill that had once came so easy to me would cause me so much stress and doubt, but there I was incapable of moving past the mental block in my mind.

I battled with my fear for weeks.  My coaches tried everything, from words of motivation to spotting me on the skill, yet nothing worked to push me past the block in my head. I began to feel stuck and considered giving up on the skill completely. The only thing left to do was go back to the basics.  I needed to reteach myself the skill to regain my confidence.  I began by practicing a back handspring on a line drawn on the floor.  Each practice, I continued that way until I worked my way back onto the beam. I started on a low beam and raised the beam as my confidence grew. With this method, it was not long before I had worked my way back to where I was before getting the mental block.  This time when I stood four feet off the ground preparing to do a back handspring, I felt like a whole new person. I had established a higher level of self-assurance, and no doubts were creeping into my thoughts. As I took a deep breath and executed the skill, just as I practiced, the landing was solid. A sense of relief and excitement rushed through me, for I knew I had overcome my fear.

This experience showed me the importance of believing in myself and never giving up. Newfound confidence was grounded in me, for I understood if I wanted to be successful, I must not give in to the illusion of fear. I transferred my improved self-confidence to other areas of my life. I began to raise my hand more in class and engage in more class discussions. When a math problem seemed impossible, quitting was no longer an option. I found ways to break down the problem, so it was more understandable.  My thought process had changed. I no longer felt that the engulfing fear of failure was holding me back.  As Thomas Edison once said, “I have not failed. I’ve just found 10,000 ways that won’t work.” If I had not been persistent in finding a way to break through my mental block, I would have never reached my full potential as a gymnast and would not be the same person I am today. The valuable lessons learned from overcoming my mental block will propel towards a successful future. When faced with an obstacle, I have the confidence in myself to know I can overcome it, and the persistence to work until I do. I now have a strong understanding that success is not always going to be linear; there will be times I am going to face setbacks that will require me to revert to the basics.  Those setbacks are what will teach me the most and shape my character so that in the end I can look back and know that although it was not easy, the feeling of overcoming adversity is worth the struggle every time.