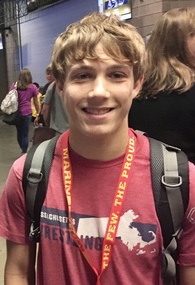 When I was in Kindergarten, I told my dad I wanted to learn martial arts, and he found a local club for me to do Brazilian Jiu-Jitsu. My father had wrestled and coached in High School, and I wanted to give it a try, but there was no wrestling club in Newton, MA until I was in second grade, so that’s when I first started wrestling. The BJJ made it easy for me to get started, and I immediately found a little bit of success on the mats. Over time, I did more wrestling, and less Jiu-Jitsu, until pretty soon I was only wrestling. In the summer of 2017 I applied, and was selected, to the Ohio All-Star Wrestling Team, which chooses 14 Wrestlers from Ohio, and 14 from other East Coast States, based on wrestling, academics and character references. We spent 56 days traveling the West Coast of The United States training and competing with the best wrestlers in the Country. Wrestling has been a very significant part of my life, and a very great passion for me. I enjoy pushing myself at practices, and I like the feeling that my hard work, strong partners, and experienced coaches are making me a little bit better everyday. I like that part of the process as much as I like competing in the actual Meets and Tournaments. It seems only natural that I would want to continue my Wrestling Journey after High School, and I’m looking to find a good fit at the College Level, both academically, and athletically. I believe that I would be a valuable asset to a College Wrestling Team because I work hard to get myself better, and I try hard to help my teammates improve, too. I’m also easy to coach, and listen to advice and criticism. I believe in the saying that ‘there are Winners and Learners’. When I can’t win, I try very hard to learn from my mistakes. I also want to graduate with a college diploma from an academically strong college, and have life options, and choices in front of me, when I’m finished wrestling.

So far in High School, I am a 2x Sectionals Champion, winning the Outstanding Wrestler Award this past season. I have placed at The Division 1 State Tournament twice, 5th as a Freshman, and 2nd as a Sophomore, losing in the Finals this past year. In the final State Tournament, combining the 3 Divisions, The MA All-States, I placed 4th this year. I’m also proud of my Freestyle. I won 3 matches at The Northeast Regionals in East Stroudsburg, PA and followed that up by going 4-2 as a 120lb Cadet in Fargo. I beat Jackson Arrington, a current PA AA State Champ in my 5th match. It felt good because I could see how I was getting better, and I posted the match in my videos section on the NCSA Page. I also posted the match from 2018 when I beat Nico Provo, nationally ranked, 2019 Pan American Games Gold Medalist for Team USA. So along with some good losses, I have recently had some strong wins over high level national competition. Academically, my goals for the coming school year is to get all of my work done, done properly, and on time. I’m hoping to earn all A’s and B’s in each of the next two years.

I want to leave you with the thought that I have been wrestling for a longtime, I have been working with world class coaches, and over the years the primary coaches have remained the same. There has been a focus on technique, drilling, and then drilling some more. From the beginning, my coaches have impressed upon me that the goal is to keep getting better each year as I progress through college, not to peak at 16 years old. I hope you’ll take a quick look at the link below showing a basic photo timeline of my wrestling from 2nd grade, though Fargo 2019. Also, if you have a few more minutes, I’d love for you to see the videos of some of the matches I just mentioned, and they are posted on this site. I’m looking forward to getting an opportunity to take my academics and my wrestling to the next level, and I want to thank you for taking the time to review my profile with NCSA and considering me for your Wrestling Program.

Yes. Some honors classes, some not.