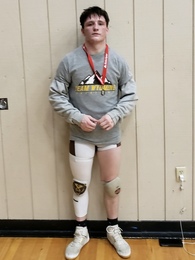 Cancer affects everyone differently in every scenario. Some people are blessed to live and fight another ten years while others only get three or four months after diagnosis. While I wish I had never witnessed either case, I have seen loved ones through both. These were two different people, living in two different parts of the states, living very different lives and experiencing very different things. But, they were not entirely different people as they both carried two similarities close to their heart; the sport of wrestling, and me. And I lost them both to brain cancer, just a year apart.

Steve Propes was a father of two young boys who loved to wrestle on the national level. Josh Collins was a father of three young girls who loved to watch their father coach wrestling at the high school level. While I knew Josh my entire life and only met Steve when I was about ten, they both affected the entire course of my life. I have taken the ideas and mottos that both of them taught me and applied them to my life today. I try to live every day like it's my last and impact people in every way I can, just the way Collins would. And I walk with my head held high, because if you believe you are the best no one can tell you otherwise, the way Propes taught me.

It is spring, so early into spring, the grass had yet to turn green. The weather had just started to reach the 60s and all we high schoolers wanted to do was go outside. I know the sun does not have a smell but whatever good weather smells like, this was the first time in months we had smelled it. It was the fourth quarter of my freshman year, about two months after coach Collins had stepped away from teaching. It was like any other day until the seventh hour when I got the text. I ran down the halls of the school to the locker room to talk to my mom before any of it even set in. I felt strong enough to go to the eighth hour until I heard the sharp, high pitched, chime of the intercom, and I knew immediately what principal Winland was about to announce. I put my head down on my desk to shelter my face and enclose it with the cold wood of the desk so people wouldn't see my emotion. The announcement left the class silent. I could hear the rapid footsteps of upset students leaving the classroom as I pressed my face harder into the wood. I could hear sniffling of students crying and I could feel the tension in the room as everyone sat there in silence, unaware of what they could or should do next. But all I could think about was his wife and three daughters that loved him even more than I did. They hurt even more than I did. And they needed help even more than I did. I remember the way my breath condensed into water on my table as I laid my face against the wood and the soft splat sound my tears made when they hit the table. These are the things I will never forget about that day, and I hope I never do. These are the last things I remember and can associate with him being alive.

Things were both very different and very much the same about the way coach Propes died. While they both died of cancer the same way, we had less hope for Steve. It was very sudden and very raw when he was diagnosed but it was advanced stages and we knew immediately that he was not going to make it. And in just four months I was sitting at the hand made wooden table in the log cabin home that belonged to Steve. I was sitting with his wife and two kids that I had grown very close to over the years. It was very hot in the house for it was in the middle of august when the funeral took place. No one said a word at that table. We had just gotten back from the funeral and while we should have been preparing for the gathering that was about to take place at Steve’s house, we were just sitting around the wooden table, sitting on wooden chairs, in a wooden house. I suppose we all just needed time to sit and think, think about the times we should have spent with him before he was taken from us. And that was the thing that haunted us all so much about his passing, Almost none of us were able to tell him goodbye. I remember the smell of the farm he lived on so vividly. Riding horses and changing water when I would stay with him in the summers. The smell of the hay and animals and the river that cut his property in half all came together to remind me of values. And that day after his funeral it only seemed to remind me of the times I spent with him.

Both of these men affected my life deeply and greatly. They also affected hundreds of other kids and young adults the same way they did me. Neither of them deserved the struggle they faced towards the end of their lives. But neither of them ever complained about it. These men were heroes to me and other young athletes whether we saw it or not. They made sacrifices, waking up early in the freezing Wyoming winters, dedicating hours and days away from their beloved families, and opening up to me about the hardest and most emotional times of their lives to help me grow. I think about all of these things they did for me as pieces of their lives, and their time in this world taken away from their families and friends, purely dedicated to helping me. That was their sacrifice, and questioning whether or not they are proud of me is my struggle.