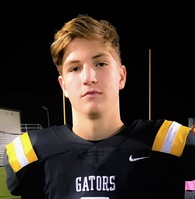 My name is Cole Poirrier. I am a Class of 2022 starting quarterback for a 5A high school (6’3, 195 pounds, 4.63 40-yd) who is wanting to play college football at the highest level possible. Academically, I have a 4.0+ GPA which speaks to my ability to balance both sports and academics.

Starting at the age of four, I’ve been an avid athlete playing football, basketball, baseball and soccer. I continued to play all four sports at the highest level of competition until 14 years of age. Reflecting back on my years as a multi-sport athlete, I can truly say that each phase of my life and each sport has defined the football player I am today. If coaches and trainers were to summarize me as an athlete, I believe they would characterize me as passionate, competitive, humbled, athletic, and well-accomplished.

During my pee wee years, my knowledge and passion for the game grew immensely. It became clear with each passing year that football was “my sport”. Of course, that came as no surprise to my family, friends, and coaches since my father played collegiate football at a Division I school. Despite football becoming my true passion, I continued to play at the highest competitive level in every sport possible because I like competing and I love to win.

During my tenth-grade year, I had to compete for the starting spot for the first time in my life. What an eye-opening experience that was for me.  Up until that time, I never sat the bench- no matter what sport I was playing. But after a lot of hard work, I was able to split quarterback time with an upper class man. I wouldn’t trade that experience in the world as I gained so much humility during that process. I also learned that determination, persistence, team leadership, and loyalty are just as important as athleticism.

As I approach my Junior year in 2020, I’m blessed with my accomplishments thus far. During my sophomore season, I earned the following awards: First Team All-District Athlete, Second Team All-Parish Quarterback, and numerous Player of the Week/Parish Player of the Week accolades.

Playing collegiate football has been a long-time dream of mine. I believe my burning passion, profound commitment, high competitiveness, genuine humbleness, exemplary leadership, and overall athleticism could benefit any football program. Please take a moment to review my Hudl/NCSA profile for my highlights. I welcome any opportunity to receive an invitation to any camps and/or football games so that I can better demonstrate the asset I can be to collegiate football.