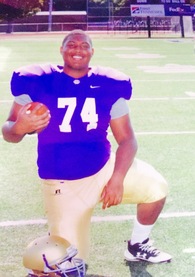 One of my collegiate goals is to be an  awesome addition to your College or University both academically and athletically! I am excited about playing for a college team that will support and defend each other and that puts time into me  and cares for me and a coach that I will truly learn from and look up to and want to play for. I also want to be a part of a team and school that I will be proud to say I graduated from. Furthermore, my collegiate goals are to be the best I can be in the classroom and on the football field. I want to major in Engineering and play college football because I love it. Later, if I am called to the NFL or if I am called to build something great as an Engineer, the College or University that has chosen me can be proud to say I was a graduate of their school. I just don't want the college or University that chooses me to put all of their time and resources in me and get nothing back so I also want to give back at some point.

Several things make me a good candidate for any team and make might make me different from other recruits.  I played varsity at St. George's as a `13 year old  in 8th grade meaning I skipped 8th grade football, Freshmen football at St. George's Independent School, and I skipped JV to play Varsity as an 8th grader and I was first string playing against seniors and juniors and sophomores and holding my own- I played on defense as a nose tackle and had 10 sacks as a freshmen and blocked the ball on several occasions. I am guessing that makes me somewhat different from some recruits.  This year since I changed schools I can't play varsity this year according to the TSSAA rules for Tennessee but I do play Freshmen football both sides first string. Also, I don't give up. My family's Mantra is "Harden's Never Give Up." I don't give up and I never stop trying- it's just something I was taught since I was little. I have been told I have these three qualities- I listen, I follow through, I am mentally calm during high stress situations (basketball and football) and  I have manners or at least that's what my coaches say. I am a big guy but you guys probably see big guys everyday so maybe that's not so special but I have been the biggest kid on all of my teams since I was little. The doctor says I still have more growing to do - I am 14 and 6'4" I was 300lbs but I am now down to 283- the varsity coach at Christian Brothers said if I lost 15 lbs and kept my grades up I would skip JV and play again on Varsity so I did as I was told I lost weight, 17 lbs and academically, I have a 3.1 GPA for first quarter of my freshmen year at a new school - strangely, I am doing well in my weakest subject-math- and in Engineering and Physics but struggling in the subject I have never struggled in and that is- English- but I am taking matters into my own hands and meeting with my Counselor who is also one of my coaches- he is really pushing me and saying that he doesn't want to see another C for the rest of my report cards and honestly, I am disappointed in myself because it brought my GPA down to a 3.1. On the other hand, I am getting stronger everyday in both grades and physically so that my sophomore year I can really help the varsity team. As both an offensive tackle and a defensive tackle ( I have also played Nose Tackle and Tight End), I have been told I have really good footwork something I believe is from playing basketball from kindergarten to 8th grade- I  also recently made my Freshmen basketball team-so I am guessing being an overall athlete is a bonus-  I am also good at baseball but I choose football above all of those sports.

As far as character, I am a captain of my line on my team now so I can lead as well. which is a plus for my character. As for my character ,I am a good person, with a great sense of humor and I bring my teammates together. When I first met my O Line Coach, he said "Never loose that Smile"  he said it was a great part of who I am. I love to laugh and smile. We have a lot of fun but we also know when it's time to get serious.  My teammates and I really get along- they have nick named me DIESEL which is interesting because my nickname in basketball since I was little has been baby Shaq. They just started calling me DIESEL and I answer to it. I like it. My mom says when people give you a nick name =they like you and I feel very close to my Freshmen team  at Christian Brothers- Our class is being told that we are going to be one of the best football class to come through Christian Brothers and that makes me really excited about playing over the next 4 years with my fellow brothers.

I plan to attend many camps this summer. Feel free to invite me. My mom and dad are willing to get me to wherever I want to go!

I can't wait to hear from you. Thanks!