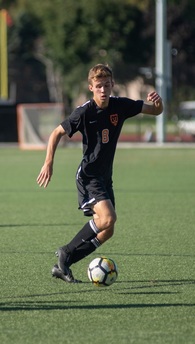 I have been playing soccer all my life, and I truly love the game. I have experience at a variety of positions. In December of my freshman year, I played forward for the Region 1 ODP team down in Bradenton, Florida. During the past two ODP spring tournaments, I have contributed a combined 8 goals and 3 assists over the course of 7 games. I also played forward for club up through last spring. During my freshman year at Suffield Academy, I was one of three freshman who made the team, and was the only one with significant playing time. I played mainly center mid for the whole season. For this past season, I played outside back for the first half of the season. Then after our team conceded 22 goals in the first half of the season, I transitioned to center back and we proceeded to keep our first 4 clean sheets of the season, and conceded only 9 goals in our last 7 games. Although only a sophomore, my coach viewed me as one of the leaders on our team this year. I feel I can truly help at whatever position necessary for the benefit of the team. As well as adaptability, my speed and quickness are some of my strongest assets on the soccer field. My Junior year I continued at Center back and we made it to the first round of the New England Playoffs for class B. I have been named a captain for next season.

This Coming December of 2019, I will be at the ODP Inter Regional with the Region 1 Team by invitation.

Outside of soccer, I run track at Suffield Academy. In my second year of track, I once again qualified for the Class B New England Track and Field Championships. I came in 3rd in the open 400m, running a personal best of 51.7, improving on my previous best of 52.28 from Freshman Year. I also ran in the 4x400 relay, which also took third.

Whilst focusing on soccer, I also work hard in the classroom. I finished my freshman year with above a 4.0 GPA and further raised that in the first term of my sophomore year to a 4.08. I try to lead not only on the soccer field, but also in the classroom. I am a peer tutor at my school, which means I stay late to help any students who need assistance with their homework or test preparation. My coaches often compliment my work ethic and team mentality, which is useful during soccer, but also away from it. I hope to attend a college where I can not only challenge myself athletically but also academically, as well as somewhere that I can grow as a person.