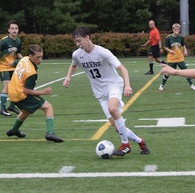 My name is Jonas O’Mara, and I am currently a senior at Keene High School, in Keene NH. As a student athlete, my goal is to play competitive soccer at an academically selective college or university. At this time I am considering double majoring in a science and Spanish, and I am hoping to combine a challenging course of study with the challenge of playing competitive college soccer.

I have been a starting midfielder on Keene High School's varsity team for my all four years of my high school career.   This year I have been named to the New Hampshire DI All-State 1st team, as a junior I was an All State Honorable Mention.  In both my junior and senior seasons I was chosen to be a team captain by my varsity teammates. From 2015-2019 I played for Global Premier Soccer's New Hampshires 2003 NPL team. For GPS I played everywhere from striker to midfield, outside back, and center back.  .

I played as a striker and center back in the Olympic Development Program from 2015-17, and I was selected for the Region I pool as a center back in 2016.

Even though I prefer playing in the midfield,  I am happy step in to fill any role that is needed to help my team be successful.  I am also very coachable, and respond to criticism by doing all that I can to improve my game. I respect my coaches, I listen to their advice, and use their feedback to grow as a player.

Academically, I am a motivated and diligent student.   I have maintained a 4.17 GPA while being enrolled in all honors and AP classes. I was inducted into the National Honor Society, and have been awarded the Scholar Athlete Award for each of my four years at Keene High School. I have also won academic contests including the Corps of Discovery award at National History Day at the University of Maryland, and have competed in state math and geography contests.

Thank you for taking the time to look over my profile.