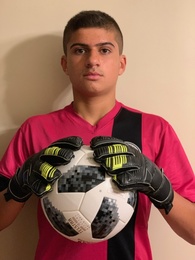 I am 16 years old and attend St Johns. Prep in Queens, New York.  I am a junior and play on the soccer varsity team as a goalkeeper.  My team competes in the CHSAA-A division.  During the Fall 2020 season, I played and started all 11 season games, keeping 6 shutouts and having an 89% save percentage.  Although losing a hard fought game in the semifinals, I was awarded with the "All-League" 1st team award at the end of the season. In addition, I also play for a high-level club, Metropolitan Oval Academy (Metoval).  At Metoval, I am the starting goalkeeper and captain for the u-17 EAL team, and I also play for the u-19 EAL team occasionally.  Furthermore, I am also a part time player on the u-17 MLS squad. I have played for Metoval for the past five years.  My goal is to play for a NCAA Division 1 school and eventually play soccer professionally.

As a goalkeeper,  my style of play is playing out of the back and playing more with my feet to create a buildup advantage for my team.  My style is similar to that of Manuel Neuer, and I take a lot of inspiration from him.  I play well out of the back because I have good ball control,  an accurate pass, and a good field vision.  This style of play allows me to open up better passing channels with my teammates by drawing attackers toward me.  However, I am also able to deliver a strong, accurate long ball with my right foot, and a decent ball with my left.  I have a fiercely competitive attitude, but also remain a good sportsman on and off the field.

Although sports is a big part of my life, I also pride myself on my academics.  I attended Immaculate conception school in Astoria, Queens from Pre-k to eighth grade.  Since middle school, I have received good grades and have been awarded the Principal's list award many times (12).  I also graduated valedictorian of my eight grade class.  At St. johns, I have continued to receive good grades despite being in honors and AP classes and for the three years that I have attended St Johns, I have been awarded the Principal's Award for Excellence after each semester. I currently have a 98 overall average, which translated roughly to a 4.0 GPA.  Whether it be academics or athletics, I am fully committed in what I do and I am prepared to sacrifice to achieve my goal, which is to become a college student athlete