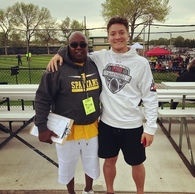 Once basketball season ended in February I started working hard again at throwing.  Unfortunately right after our first practice meet they suspended the season, which is of course disappointing.  I really wanted to win State in discus this year.   I have uploaded  film.  I have been throwing once a week and working out during this period of online high school.

We do not have a throw coach at TJ.  I have been training with Coach Jeremy Bubb and Coach Brian Hoffman.  Coach Bubb has  agreed to run a "mini meet" at the end of some of our workouts.  He verifies a clean throw in the ring measure my distances so I can post here and keep updated. We went once a week until we took a break in April because of the distancing rules.  We restarted towards the end of May.  Coach Hoffman was my coach when I first started to throw in 8th grade and I also throw with him when he is available.  I have included their distance certifications.

My name is Jeremy Bubb. I am a USATF certified coach with a degree in Exercise Sports Science.  In college I attended Western Colorado University and competed as a decathlete at the Division II National Championships finishing in the top 10. I was also a US post collegiate athlete competing under the Rudy Project.

I have coached at University of Nebraska at Kearney, Western State University of Colorado, Colorado Mesa University, as well as MSU Denver.  I have had the privilege of coaching numerous All-Americans, as well as the national champion in the hurdles and the second furthest girl’s high school discus thrower in United States history, and several conference team championships.

I have been overseeing Avery Shunneson’s training the last few months. Taking into account the latest Covid-19 outbreak and season cancellations across the board, I wanted to verify his distances for your consideration.  Below are a few of the more recent throws, all of which were clean and legal throws, measured by myself.

He’s growing phenomenally and has a good deal of untapped potential. Even more enticing - he is very coachable.

Please feel free to reach out to me personally, at your leisure, if you have any further questions or inquiries!

My name is Brian Hoffman. I am a throw and strength coach in Colorado.  I have been assisting Throwers for 10 years in Colorado and have had the privilege in helping many athletes go on to college careers in Track and Field.

I have worked with Avery Shunneson since he was in 8th grade.  Because of the Covid-19 pandemic the track and field season was cancelled.  Avery was disappointed as he had a good chance at winning state in the discus this season.   He has kept working however and has asked to certify some clean throw distances at the end of a workout to update college coaches.  These throws were legal throws, and measured by myself.  We will continue to do this through the summer.

I can be reached at the below cell number or email for any inquiries or questions.

I am very interested in Environmental Sciences, English, and Spanish. I spent two years of my elementary education in Spanish immersion and at this point I am  bilingual.  I completed  Spanish AP in my sophomore year.  Through my Freshman and Sophomore years  I was able to maintain all A grades in my classes.  I hope to continue to get all As through high school.  My Sophomore year I  completed two AP classes ( Environmental Science and Spanish) along with honors classes.   I just finished my Junior year  taking AP US History  and AP Language along with Honors integrated math 3,  Honors Spanish literature, and  Honors physics.  I was able to get All A grades.  I took my Ap national right at the end of the school year.

My main goal is to attend the best academic school possible while being able to compete at the college level in athletics. I took the SAT for the first time early so I could get a read on where I could  improve.  My first score was 1330 and I will take it again soon as I can.  I was taking practice tests and scoring well before the March test was canceled.

For TJ I play football, basketball and compete in track and field .  I have started varsity at linebacker  since the first game my freshman year.  This last season I was a team captain and named team MVP.   I was also named First team Academic All State.  In basketball we had an outstanding season advancing to the second round of State.

Of course with no season this year in track the last season I competed for TJ was as a Sophomore..   Things went well.  I was able to increase My PRs in both Discus and Shot considerably.   I won the Denver Prep League championships in both events and finished third in state in 4A discus and 9th in Shot.  I was the top rising junior in the state going into this season in discus and I believe fourth in Shot.

From the moment I picked up a discus I fell in love with throwing it.  I am using the disappointment of not being able to try and win State this year into motivation to win it next Spring.   I look forward to competing in the hammer and weight throws in college as we do not have those events in Colorado High schools.