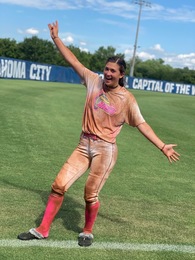 I started playing tee-ball at 4 years old. I don’t remember much, but my mom says that I loved it from the moment I stepped on the field. In photographs, I am easily recognizable as the little girl in pink Dora shoes while everyone is in cleats. Technically, I was a shortstop, but I couldn’t be confined to any one position. My coach would laugh as I bolted across the field to take balls from second, third, and even first base.
At this time, my father began to succumb to alcoholism and drug addiction. My grandfather died of cancer when I was 7. After his death, we left Michigan and moved west. There, my mom could finish her degree and support my brother and me without the help of our father.
In California, I started playing baseball. I was the only girl. I made the All-Star team every year and went to the state championship for 2 years in a row. At the same time, I started playing travel softball for the Mad River Mist, where I quickly moved from 10U to 14U. By 11 years old, I was promoted to 18U. The following year, I transitioned to NorCal Bownet, where I grew tremendously by facing tough competition such as Universal, Cal Breeze, West Bay Warriors, Firecrackers, Batbusters, and more. It was well worth the 3 and a half hour drive to practice. We had a very successful season and placed 3rd at TCS Nationals. That experience solidified my goal to play college softball.
Throughout my life in California, I had to go through several hardships. My grandmother died, my dad was absent, my mom suffered from mental health issues, and we struggled to make ends meet. There were days where we couldn’t put food on the table and times that we were homeless. However, I was fortunate to have a mom and brother that supported me and prioritized paying for me to play softball.
In 2017, I suffered from severe mental health issues and was hospitalized. We were in a rural area where I couldn’t access the care I needed, so we moved to Chicago. My brother stayed in California to complete his community college classes (he is now attending MIT). In Chicago, my mom was hired as a teacher on the south side and I met Coach Jim Goranson, who I still play for.
While playing for Coach G, I began to focus heavily on the mental aspect of the game. I learned to use softball as an outlet to escape from my otherwise tumultuous life and to not let the world around me hinder my performance. This was tested at a tournament in Florida when I found out my mom had a mental breakdown and was admitted to the ER just an hour before a game (I had traveled alone, leaving my mom in Chicago). My first at-bat of the game, I hit a home run. That experience exemplified how far I had come mentally, and turned a difficult time into a learning opportunity.
The mental strength that I learned on the field not only improved my game but taught me to overcome issues in life, too. My passion for softball has saved my life. It inspired me to start planning for a future I never saw myself as having. Thanks to softball, I am now mentally healthy, ranked #1 in my class, starting on my school’s varsity baseball team, and working hard to develop into the best recruit I can be. I hope to honor the many sacrifices that my family made for me by playing in college. I want to prove that I am capable of being more than what I grew up with by being the best student-athlete possible. I hope to have the opportunity to bring a solid work ethic, positive attitude, passion for the sport, competitive mindset, and mental strength to a college roster.

Yes. I am a student of the IB program. The International Baccalaureate® (IB) offers a continuum of international education and college level courses. In the IB program, all courses are honors level in 9th and 10th grade, followed by the DP curriculum in 11th and 12th grade which is based on a 6.0 scale and considered to be the highest level of high school courses offered and more advanced than AP.