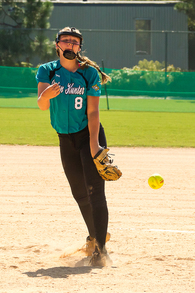 I am very interested in playing college softball! I would play every weekend if I could!

I played for Grassfield High School on Varsity.  We are a 6A team and last year Grassfield was the State Champion at 6A.

Grassfield HS ball, we lost in semi’s at States.  We were ranked #1 in VA for most of the season.

I take my grades very seriously and have worked hard to get them where a school like Indiana may be interested. I took the SAT for my first time and received a 1250 and I am in all honors and AP classes and currently have a GPA between 3.9 and 4.0.

Last year, as a freshman, at Grassfield HS (6A in Virginia, ranked #1 by max preps) I was voted to:

I have led my travel team Orion Hunter Teal (ranked #22 by US Club Rankings) in both ERA and Bat. Avg.

I would love to get on your recruiting radar!

Thank You! Good Luck with the season!

Yes. I am in all HONORS classes at Grassfield. I am on track to graduate with the most advanced degree possible from HS.