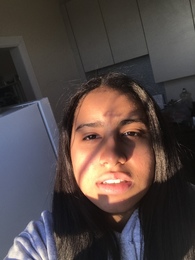 Hey, I'm Scarlet Estevez, I'm 16 years old, I'm from the Dominican Republic and I am a junior at Garrett Morgan Academy in Paterson, NJ (Class of 2022) .  I love to hang out with my friends and just and chill and vibe with them, I also play the guitar and I 'try' to skateboard lol. I haven't been playing soccer for that long, probably 3 years but I completely give my all and my best every day, no matter if it's practice or game, I believe I'll keep improving and progressing throughout time with my effort.  I didn't play many sports growing up, but it isn't like I wasn't active in multiple, like softball, which my Father played when he was younger, basketball, and volleyball. Soccer, I began watching once I arrived in this country when I was 9 years old, the inspiration came to me when I watched the USWNT win the 2015 World Cup against Japan, which is where I started developing a love for the game, a couple of years forward,  I got into my first soccer team where I played as a goalie and midfield then I stopped for around 2 years due to money inconveniences at home. Furthermore, once I was 14 or so, I started my journey with a High School team (JFK) and eventually, my club team too, from there on I've played nonstop and I'm still learning some things about the game.

Additionally, in school, I'm doing great! I'm currently with A's and B's with one C but that'll change soon, my school doesn't have clubs or teams so I'm not in a book club or running for President or anything like that, the high school team I play for isn't the high school I attend so it may seem like I'm not school active but it just that they don't offer any options. I believe that my determination and confidence make me 'unique' or a distinctive individual or so I've been told, I always have someone to prove wrong so I'm always grinding, but on the field, I get very dominant and very loud which generally I'm not and that's something I love to bring out when it comes to doing something I love but also to increase my team's chance at winning. Finally, I'm still working on putting up a video, but recently it has been complicated due to the pandemic and games and tournaments being canceled, but once I'm back on the field, I'll definitely put up a video. In my recent season with my high school team, I ended up with around 60+ saves as a goalkeeper, and with my club team, I've won two medals as the 2019 NCSA Champions, Turf City 2019 Thanksgiving Tournament Girls U15/16 2nd place indoors and a trophy with the same team, Turf City 2020 Girls U15/16 Winter Youth League Stage #2 Champions