College Coach? Click here to view all of Kayla's information. 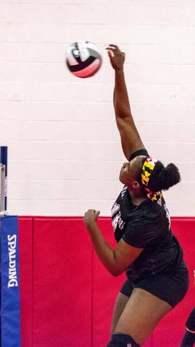 I am a 6 ft. 1 inch. strong middle hitter who have been playing club volleyball with elite travel teams since age 9.  I played basketball and baseball as well and excelled in all three sports, but volleyball is by far my favorite. I was an extremely shy child but my love for volleyball and the friends I made along the way has helped me to evolve into a more confident individual.

I primarily play middle due to me usually being one of the taller girls on my team, but coaches have utilized me in all positions. I recently played outside hitter for my 2018-2019 high school playoffs which is seen in one of my videos, and I have even been utilized as a setter by one of my former school coaches.  I am always willing to do whatever is needed to assist my team.  I am very coachable  and work hard on and off the court.  I consistently maintain at least a 3.80 GPA or higher while taking honor classes. During the past three years, I have also added personal training sessions to my weekly schedule to improve my physical performance on the court.  I have  been very instrumental in assisting my club team earn a bid to nationals during the past 3 club seasons. I am currently a junior who have been a starter on my varsity team since entering high school and was recently selected for one of the USA High Performance teams this past summer.  I was also earned the All Team award at the Varsity Oakdale High School tournament this past fall and made All County first team. Below is the Baltimore Sun article of my selection.

Browne, a three-year starter and a second-team All-County pick last year, was one of the most intimidating players in the county this season. At 6-foot-1, her powerful swings were unstoppable at times, but she was also one of the most well-rounded players in the area and finished with 32 aces, which were key in the Gators’ playoff win against Atholton. Her hitting, however, was her strongest suit, as she had the second-most kills in the county with 204. She also had 18 blocks.

“She is driven to be the best player for her team. She is selfless and always puts her team first,” Reservoir coach Carole Ferrante said. “Kayla brings a chemistry to her team that brings out the best in each and every one of them. She makes each player around her want to be better, work harder.”

The following is a link to my volleyball evaluation that was done in September, 2017.

My goal is to play volleyball competitively in college for teammates that uplift each other to build a strong confident  team who's willing to work hard and fight to the end through tough games for each other, and to have a coach that's willing to push the team to their highest potential.