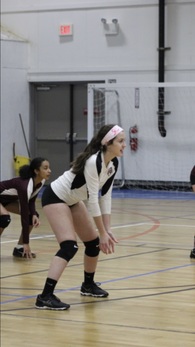 It has always been challenging to stay motivated throughout hardship. My team once faced difficulty during a volleyball tournament in which we had been losing every game. The entire team began to give up, and we were not working together because we were all frustrated. I felt compelled to step up, and try to lift my teammates’ spirits by encouraging them and making them laugh. At first, none of my efforts were successful and I, too, began to feel discouraged and hopeless. But then, I made a comical mistake on the court, and everyone started to laugh. Although I was initially embarrassed, I chose to let go of my concern for what others thought of me, and embrace that this moment brought our team out of the rut. As the captain of my team, I’ve learned that in order to motivate my team I often have to push aside my own frustrations. While this isn’t easy, I continuously practice shifting to a positive focus, even when I am down on myself, in order to better lead my team.

Another challenge I have faced as a volleyball player is learning to adapt on the court. In 2018, I entered the season expecting to play as a setter. Instead, I was asked to play on the varsity team as a libero even though I was only a freshman. In fact, I was the only libero in my entire school. Although this position was incredibly challenging for me, I dedicated a lot of time and effort into practicing and learning the position. Now, I am proud to be one of the best passers on my team. I, again, was challenged to adapt on my club team when the coach placed me as a hitter. I worked as hard as I could and while I am not very tall, my coach is excited about my hitting abilities as a libero!

A time that I was seen as a leader was when I switched over to Supernova. I was originally on Mass Patriots, on a U14 B team, and I was only 13 then. When I switched over to Supernova they put me on a U16 team. I didn't know anyone on my new team, and I wasn't happy with the team I was on. I wasn't happy because I was the only one who had been playing for over 3 years. After maybe the first 2 practices I was already best friends with everyone. Then when our first tournament came around we didn't have any captains yet, but after our first game my coach pulled me aside and told me that my team was looking up to me as their captain. Ever since then I was the captain for my team. I also got an opportunity to coach kids younger than me and the same age as me at a clinic.

Some goals I have for myself in college is to be able to make amazing friendships. I have a hard time with meeting people because I’m pretty shy at first, but when you get to know me I guess im pretty funny. I would love to get the opportunity to play college volleyball. I am the type of person who is always looking for ways to test myself, and push myself. Being on a college team would be huge because if you don't put all this time and effort into it you’re not going to get anywhere.

I am they type of person who can bring joy to a whole gloomy group of people, (or that's what my friends say.) The small funny comments I make up on spot are usually my best work. I am also a very loving person, I have this huge heart for helping people, and little kids. I work at Starland where I host birthday parties for kids, coach little girls in volleyball, and work in the arcade where I hand out prizes. I love to baby sit or play with kids. I even volunteer at my church nursery.

I am a student who over works myself. I always try to do my best in everything I do, even if the out come of it isn't good. I have come a very long way since second grade. I was originally this little girl who would cry every time her parents dropped her off at school. I also had very bad anxiety that caused me to just get so overwhelmed that i wasn't able to function. I also had, and still have a learning disability, so it makes it harder for me to learn. My parents saw how bad I was doing in public school, and had me shadow at the school my little sister was attending. After shadowing at SSCA I was convinced I was never going back to public school. A few weeks after the day I shadowed my parents both agreed they had to get me into SSCA as soon as possible. At SSCA the teachers actually wanted me to be successful and be able to learn the way that other students didn't really. I was so far behind all the other kids, but the teachers helped me become this student who would be getting A’s and B’s on almost all the tests.

I used to be this kid who never thought they would get any awards in anything, but I thought wrong. Not only have I gotten multiple athletic awards, but also many academic awards. Every year I get high honor roll for the 2 semesters I have. I have also gotten most improved back in 2017 for volleyball. Back in 2018 I got the most athletic award for my 8th grade year. I also got the Bible award, and another academic award. All these awards took lots of time and energy to get, but I am so thankful for each and everyone of them.