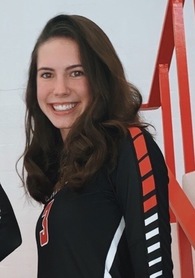 Competitiveness, discipline, and a personal drive to win are central facets of my personality. Growing up the sole sister in a household with two older brothers, I quickly learned that having a fiery, quick, and competitive nature was the only way to ensure that I was included in my siblings' games. Simply put, if I was not able to rival my brothers' athletic and strategic abilities, they would not welcome me in their activities. Since I was a very small child, my spirited attitude has manifested itself in a desire to push myself to my own limits in everything from academics, to service activities, to athletics. Volleyball, a sport that my extended family has played every almost Sunday afternoon on the banks of the Rio Grande River and in Albuquerque parks for more than 60 years and across five generations, has provided a natural outlet for my drive to succeed.

Although recreational volleyball has been part of my life since before I entered elementary school, the competitive side of the sport is relatively new to me. I am unusual compared to many of my volleyball peers because I have only played organized club and school volleyball for four seasons each. I am still growing rapidly in my physical strength and knowledge of the game, and my enthusiasm toward the sport is only increasing. Some highlights of my volleyball career have been:

In addition to my athleticism and physical contributions to my high school and club teams’ play, I am proud of the fact that my coaches consistently tell me that I have unlimited potential and that I am one of the most level-headed, respectful, and coachable players with whom they have worked. Both coaches and the athletic director at my school have independently told me that they think my best years of volleyball are yet to come. I want to play college volleyball to continue challenging myself at top levels physically and mentally. Moreover, I want to play in college because of the genuine joy I experience in working with equally motivated teammates toward a shared goal. The camaraderie of team play represents the dimension of volleyball that has become among the reasons I absolutely love the game. Finally, I view volleyball and academics as interconnected in that both will allow me to attend a top-tier university.

I am an intense scholar-athlete who balances the demands of attending one of the most prestigious and rigorous independent schools in the country with a full extracurricular schedule. (In 2015, Bestcolleges.com ranked my school as fifth among the top fifty private high schools in the nation using Niche.com data; currently, it is ranked within the top 65.) I have maintained a 98% cumulative grade point average (4.28 weighted GPA) while taking courses such as AP Chemistry, Biology, and Physics, Spanish III & IV, and Calculus AB & BC. Faculty honored me with six commendation letters, one for each academic course I took, an award given each year to only 1-2 students per class. My standardized test scores make me an academically viable candidate for National Merit honors and for attending a top-tier university. My October 2019 PSAT score is a 1430 (720 evidence-based reading/writing and 710 math; 99th percentile). I was named National Merit Semifinalist in September 2020. My pre-ACT score was a 31 (27 math, 30 science, 34 English, 33 reading).  Additionally, I am a Community Service Executive Board member and a two-year member of Community Service Honor Society. In volunteer work, I planned and oversaw a charity wheelchair basketball game, taught faculty and the entire seventh-grade class CPR through Project Heart Start, assisted in planning and executing two blood drives, and tutored African refugee children most Saturday afternoons, logging over 180 hours of volunteer time. For summers  2018 and 2019, I simultaneously worked paid jobs and took credit courses to advance my academic course of study; summer of 2020 (COVID-19), I volunteered at a daycare serving the children of essential workers. I believe that my challenging year-round academic load and my commitment to hard work reflect on personal qualities that make me an attractive student-athlete for your program.

I know that I have the ability to make strong contributions to a college team, and I sincerely appreciate your consideration of me as a recruit for the incoming class for fall 2021.