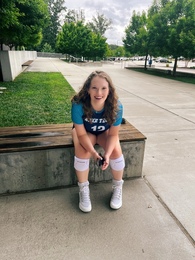 Upon entering middle school, I wanted to be involved in school sports which led me to try volleyball. I quickly developed a passion for the sport and realized I enjoyed being a team player rather than an individual athlete. I have always had a desire to become the best I can be and doing whatever is necessary to reach the next level, including volleyball camps, dozens of private lessons, personal training sessions and practicing on my own.  This hard work earned a starting position on my varsity volleyball team as the only freshman in 2017. The team was state runner up NCISAA 2A that year.  My sophomore year, I became even more of a key player and helped lead our team to an undefeated, NCISAA 3A state championship. We were able to repeat that success in 2019 with another NCISAA 3A championship.   Now in my senior year, my role in the school's volleyball program has grown even more.  I am the captain of the varsity team and a volunteer coach for the JV team.

I have been playing club volleyball since the fall of 2015. I have always been a key player on my club teams and was captain some years. In fall of 2018, I was placed on an 18u team, which was playing up by 2 years.  In club season 2019/2020 I continued to play up by one year on the highest level 18u team and I was named captain.

Throughout my years of playing volleyball, I learned no matter what team I am on, one of the most important elements of success is attitude.  Having a positive and supportive attitude is crucial, no matter if we are winning or losing.  The most successful teams I have played on were extremely low drama and the teammates all supported each other entirely.

I want to attend a college that will challenge me both academically and athletically.  I want to pursue a career in the neonatal healthcare field. Therefore, I plan to major in nursing or biology for my undergraduate degree.

Outside of school and playing volleyball, I volunteer as a recreational volleyball coach for 4th and 5th graders.  I have also volunteered in a local child care center.  I feel volunteering is an important way to serve the community.  In 2017, I achieved the presidential service scholar award by volunteering for more than 100 hours.

I also work in a fitness center as a group exercise instructor, which has helped to develop my leadership skills and provides cross training to reduce risk of injury and maintain my fitness level year round.

In my spare time, I enjoy spending time with my friends and family.

Thank you for taking the time to consider me for your volleyball program and I hope that I will be a good fit!

Yes. All classes honors except AP and electives.