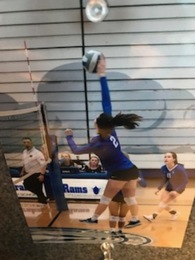 I am an incredibly hard-working 6’0” Middle Blocker viewed as both a threat offensively and defensively at the net.

Below is a quote from my Seattle Preparatory high school Volleyball Coach, Marcene Sullivan, as posted in the March 2019 Prepvolleyball.com Soph 79 list of Top High School Sophomore volleyball players in the country - I was named as a Honorable Mention.

“McKenna stepped up her game to another level this season” and was “a real force at the net, is an extremely hard worker and is committed to excellence”.

My passion for volleyball dates back to first grade and has evolved into Club Teams (Cascade VB Club – Seattle) and my high school team – where I am looked at as a team leader.

This past year (2019 - Junior season), I played a very impactful role on the Seattle Preparatory High School Volleyball team that finished 8th in WA state (3A Division). I started every match and was a go-to set when we needed a point. For my efforts, I was named 1st Team All-Conference in Seattle Metro League and named All-State Honorable Mention (MB).

My college volleyball interests include getting a great education and being a part of a volleyball program that gives me the opportunity to improve my skills as a student-athlete. I am seeking a well-rounded academic and athletic environment in which I can excel as a student-athlete for the next four years. I plan to find a school and program in which I can share my skills and abilities, as well as grow as both a player and person.

This Summer (2020), I will be working on running different sets, fine tuning my blocking technique, and doing some outside hitter work (this past season, I played a few sets as an outside). I am playing for the Washington Volleyball Academy U18 team with national  tournament scheduled for June in Orlando, FL.  I will also be playing against high level competition at the University of Washington Volleyball Team Camp – Seattle, WA in July.

I am confident that my skill set, work ethic, commitment to improve and overall passion for the game will afford me the opportunity to play college volleyball. I hope to bring my volleyball skill set and academic prowess to your program.