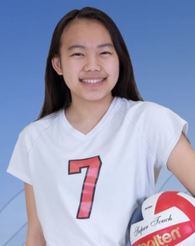 This is how I fell in love with volleyball.

Growing up I wasn't a very active kid.  I was not very interested in sports or games, and I preferred doing art and making things that were unique. I didn't find my drive to do sports until I entered middle school.  My  older sister played soccer so I thought that I would also give soccer a try. I wasn't very interested in volleyball until I watched my cousin play, and that is when I fell in love with volleyball and knew that volleyball is the sport I wanted to play.  When I first started playing, being good wasn't my goal. I simply wanted to be able to play volleyball.  Then one day, I attended a volleyball training session, and saw girls my age play competitive volleyball, which changed my perception of the game and gave me the drive to improve my volleyball skills. This marked the moment I became passionate about volleyball and decided to discuss it with my parents and let them know that I wanted to play this sport seriously. As I hoped, they agreed.

My parents made me aware of the sacrifices I would have to make in order  to reach my dream and my goal of playing volleyball throughout high school, college, and even beyond that. I understood what I had to do because I wanted it that much. Once they put me in club volleyball, my biggest struggle was being behind everyone else skill-wise. My skill level wasn't at the same level as the rest of the girls in the club, and although I felt a bit discouraged, this didn't stop me from doing my best and giving it my all. It took me a lot of sweat and tears, but I eventually was able to raise  my skill-level to be on par with others, and even surpass some. I used to cry while working out and I thought to myself that I couldn't do it, almost giving up even, but my mom, my biggest motivator, never gave up on me and helped to push me through everything. she was always there for me, on my best and worst days. She helped me grow into the volleyball player I am today. My mom is still one of my biggest motivators and supporters.

One of my goals was to be able to play on the same volleyball team as my older sister and cousin before they both graduated high school.  My older sister wanted to quit volleyball before I entered high school, but she knew how much I wanted to be on the same team and court as her, and so she kept at it. As a freshman, I tried my very best to try to get on the same team as my older sister and cousin. It was difficult and I was afraid that I wasn't going to make the same team as them and be able to play with them. I was a freshman and they were both juniors, I was extremely nervous. When I found out that I had made the Varsity team, I was beyond excited. I was going to be playing volleyball with them, as a freshman, as a starter and not just sitting on the bench. As graduates of the Class of 2020, this was the last year I had the opportunity to play on the same team as my sister and cousin. These past 2 years will remain one of the best moments of my high school life with them and some of my fondest memories.