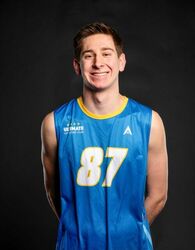 My name is Michael Greco.  Currently, I am in my third season of Club Volleyball for the Ultimate Volleyball Club -17U Gold team.  I am a middle hitter and I am a starter on my team.  I am looking forward to my upcoming high school team this Spring.  During my first club season for Ultimate, I was selected to the USA Volleyball All-Tournament Team (All American) at the Nationals Tournament  held in Dallas, Texas. In addition to my club team, I played and started for the Junior Varsity team for Lincoln-Way Central High School as a freshman.  I was the leading blocker on my team.

I began my volleyball career in the 7th grade while attending Martino Junior High School. I was a starter on my team and was middle hitter.  We did not have the best season due to the fact that it was everyone's first time playing the sport.  The following year, while in the 8th grade, we had an amazing season with an 11-2 winning record, winning the conference championship for our school and placing 2nd in the Des Plaines Valley end of the season tournament.  I quickly realized the true passion I had for volleyball. Therefore, I gave up baseball and basketball my freshman year of high school to pursue a career in volleyball. I tried out for Ultimate Volleyball Club and made the 15U Blue team my first season.  I had never been on a team with as much chemistry and heart as we did. I kept telling myself how very fortunate I was to be able to play with guys who have high character, that play for each other and the team, and that play to win. Our season started off with many ups and downs, but ended on many highs. We tied for 5th place in the Club Division at Nationals in Dallas, Texas. It was an awesome experience for me and I would not want to do it again with any other group of guys. During the last day of Nationals, I was selected to the All-Tournament Team. I went into the tournament with two goals:  (1) to give it my all and play at the highest level of my ability; and (2)  to lead my team into the gold bracket. Henceforth, I am very grateful that I got the chance to do both. When I was named All American, I was instantly numb. I could not believe what was happening. It was by far one of the greatest accomplishments in all of my years of playing sports. Afterwards, I remember my coach telling me, "You have all of the tools and knowledge Michael, and if you mentally put in the focus to really get better at this game, you're going to be one heck of a player."

The primary position that I have been playing since the very beginning of my volleyball career is middle hitter. This is the position that I enjoy playing the most for my team. I love playing the middle position because it gives me the ability to lead my outsides and opposites in blocking. I believe the greatest thing your team can do in the game of volleyball is put up a strong block because it helps fire up your team and give your team the energy needed to pull out the win. Blocking is every volleyball team's first line of defense in the game. So, it crucial to set up a good block for your team which is what the middle position allows me to do. It lets me make a great contribution to my team.

This is my junior year in high school and I am currently enrolled in one honors class and  three AP courses while managing a 4.0 GPA. I am also a member of my school's Best Buddies Program that gives me the opportunity to help children with disabilities. I love being involved in this club because it promotes global volunteer movements that create opportunities for children that suffer from intellectual and developmental disabilities (IDD). I am also involved in my high school's National Honor Society (NHS) and Science National Honor Society (SNHS).

I understand that to play any sport at the college level is something that is earned by proving yourself by hard work and by having a good attitude on the court and in the classroom. I have been preparing myself for a long time for an opportunity to play volleyball at the college level, so I have all of the necessary skills and mentalities to compete against other talented schools and players. I am open to all options and cannot wait to find my dream college that can push me to be better in both the classroom and on the court.

Thank you for taking the time to view my profile!  I hope to hear from you soon!